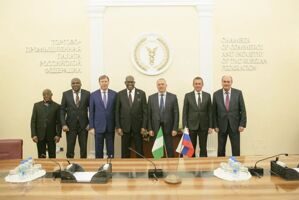 In his welcoming speech, the head of the federal Chamber noted that in order to increase cooperation between the two countries, it is necessary to know each other better. "We can share the information received from you with other regional chambers of commerce, of which there are about one hundred and eighty. The Chamber also regularly hosts presentations of countries and companies, which can be used by the Nigerian side." Another important form of information exchange is exhibition activity. Such opportunities are provided by Expocentre Fairgrounds. Thus, there are all the necessary tools for mutually beneficial cooperation.

Ambassador Abdullahi Shehu, who arrived in Russia this year, noted that since Nigeria gained independence, our two countries have maintained stable relations. According to him, the two countries could achieve more in their economic cooperation if Russian business showed more interest in Nigeria and Africa as a whole. He noted that 60 percent of the market in West Africa is controlled by Nigeria. "For any Russian companies, Nigeria is the gateway to Africa," the ambassador said. As an example, he cited the Russian company Uralchem – one of the largest companies in the mineral fertilizers market and the second producer of nitrogen fertilizers in Russia.

The Nigerian Ambassador called on other Russian companies to follow the example of Uralchem and not only deliver goods to Nigeria, but also produce them in this country. The diplomat also said that the embassy intends to organize a business mission to Nigeria in the near future, and offered the CCI of the Russian Federation to assist in organizing trips for interested businesses. Abdullahi Shehu stressed that the embassy is ready to organize trips of representatives of Russian companies to Nigeria on a permanent basis in order to better learn the working conditions in this country, to understand the risks that exist there, because, as he put it, there is no business environment without risks.

Dmitry Konyaev, Chairman of the Board of Directors of Uralchem, who was elected in May 2021 as the new chairman of the Russia-Nigeria Business Council, who was present at the meeting, said that the company will open its representative office in Nigeria in the near future and intends to open a plant. He also noted the great potential of the Nigerian market for the supply of mineral fertilizers. But at the same time, he noted the importance of exporting Russian knowledge and technologies to this African country. Dmitry Konyaev suggested that the Nigerian side send young people to Russia to study, who could study agricultural specialties in Russian universities.
The chairman NIDO Russia, Mr. Uwem Sampson thanked the president of the Russian CCI for receiving the ambassador, H.E. Prof. Abdullahi Shehu, , he also thanked all those who made the courtesy visit a success. In his brief remarks, he spoke about a "fact finding" business mission planned for November and the importance of active collaboration from all sides. He also spoke about the need to organize another meeting to address financial transactions between Russia and Nigeria, as the financial instruments available now are too weak for the contemporal needs, he proposed that the composition of meeting should include institutions such as the Russian Export Center and all its affiliates.