A round table "Creating conditions for SMEs in the development of trade and economic cooperation between Russia and Africa" was held at the Moscow Chamber of Commerce and Industry.

Home
/
EVENTS NEWS
/
Round Table: "Creating conditions for SMEs in the development of trade and economic cooperation between Russia and Africa"
← Предыдущая Следующая → Thursday 21st of October 2021 witnessed a landmark event. Within the framework of the event, the Moscow Chamber of Commerce and Industry, represented by the President of the Moscow Chamber of Commerce and Industry Vladimir Platonov, signed two cooperation agreements: with the Russian Association for International Cooperation (RAMS) and the Association for Economic Cooperation with African Countries (AESSA). On the part of the RAMS, the chairman of the Presidium of the Association, Sergey Kalashnikov, signed the document, and on the part of AESSA, its executive director, Anna Belyaeva. 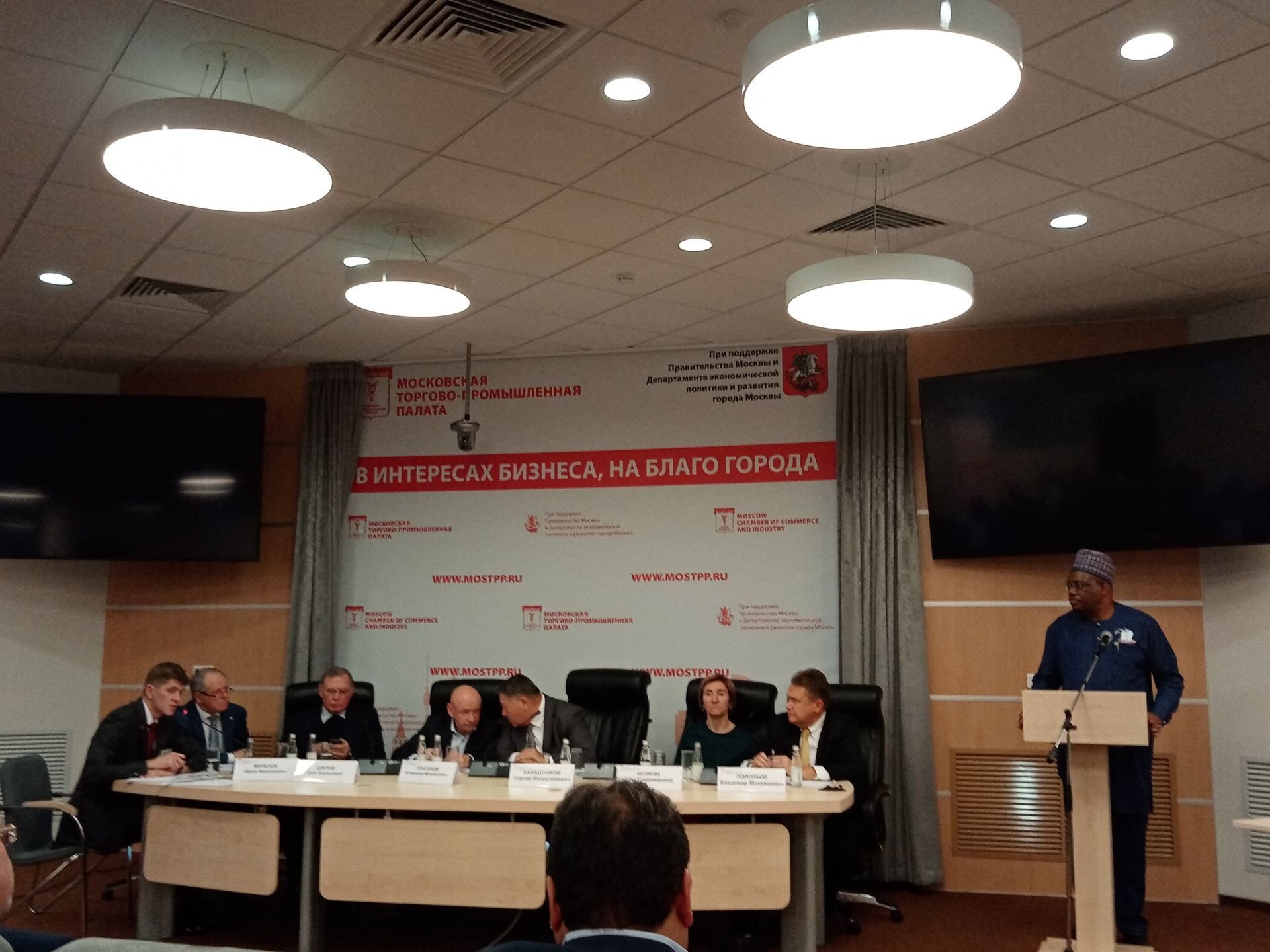 "This is a landmark event, since 2021 is marked by the preparation for the Russia–Africa 2022 Summit and Economic Forum," Vladimir Platonov said.  As a graduate of the Peoples' Friendship University, I am especially pleased to take part in today's event. The African direction is one of the priorities of the international activities of the Moscow CCI. In recent years, the Chamber has been actively working with the business community of a number of African countries (South Africa, Mozambique, Nigeria, Tanzania, Namibia, Côte d'Ivoire, Cameroon, Ghana, Chad, Sierra Leone, etc.). We were a partner of the group of embassies of the countries of the Southern African Development Community (SADC) in the Russian Federation for the organization of the SADC Investment Promotion Forum, which was held in Moscow in October 2018. Within the framework of the Russia-Africa Economic Forum in Sochi, cooperation agreements were signed with the Abuja Chamber of Commerce (Nigeria) and the Côte d'Ivoire Chamber of Commerce, as well as a Memorandum of Cooperation with the Ministry of Trade and Industry of Sierra Leone. Negotiations were held between the leadership of the Moscow CCI with the Economic Development Agency and representatives of the Special Economic Zone of Ghana." The head of the Moscow Chamber of Commerce and Industry told the participants of the round table that the Chamber is one of the main partners of the Moscow Government in organizing business events, and also participates in the study of the most promising country and industry directions for exporting enterprises in Moscow using the opportunities of Commissions for Foreign trade cooperation with partners from various countries and foreign business associations. In addition, within the framework of agreements, the Moscow Chamber of Commerce and Industry actively cooperates with a number of departments of the City of Moscow: foreign economic and international relations; investment and industrial policy; entrepreneurship and innovation policy; economic policy and development of the City of Moscow, with the Moscow Fund for Industry and Entrepreneurship Support (MFIES). In addition, the Chamber participates in the work of Expert Councils at the Headquarters for the Protection of the Rights and Interests of Subjects of Investment and Entrepreneurial Activity in Moscow, the Mosprom Center, the Moscow Export Center. 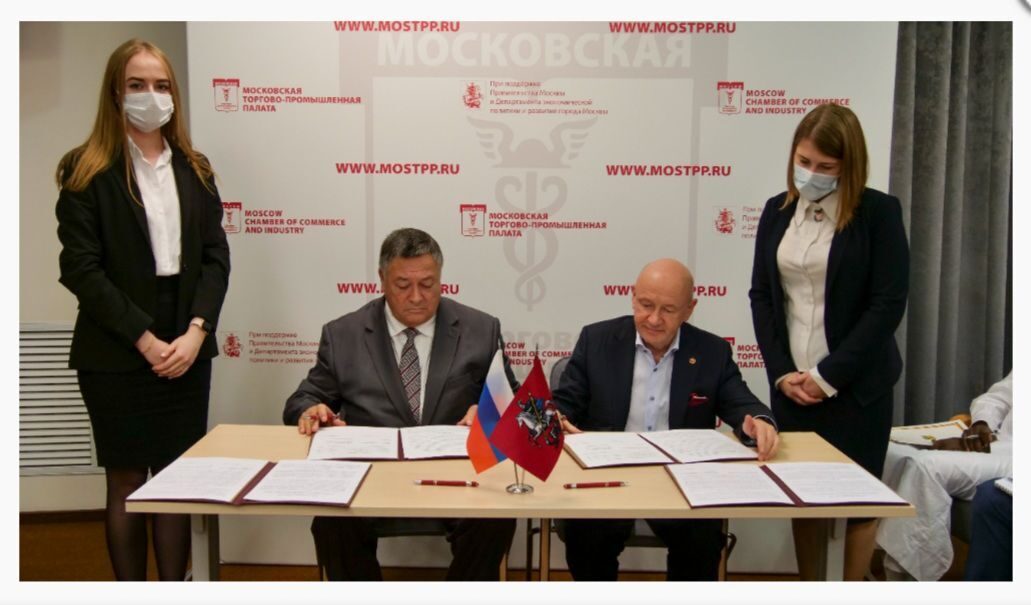 With regard to the development of relations with African countries, the Commission on Foreign Economic Cooperation with Partners in Sub-Saharan Africa is actively operating with the Moscow CCI. Currently, the delegation headed by its chairman Konstantin Anastasiadi is on a business mission in some West African countries. 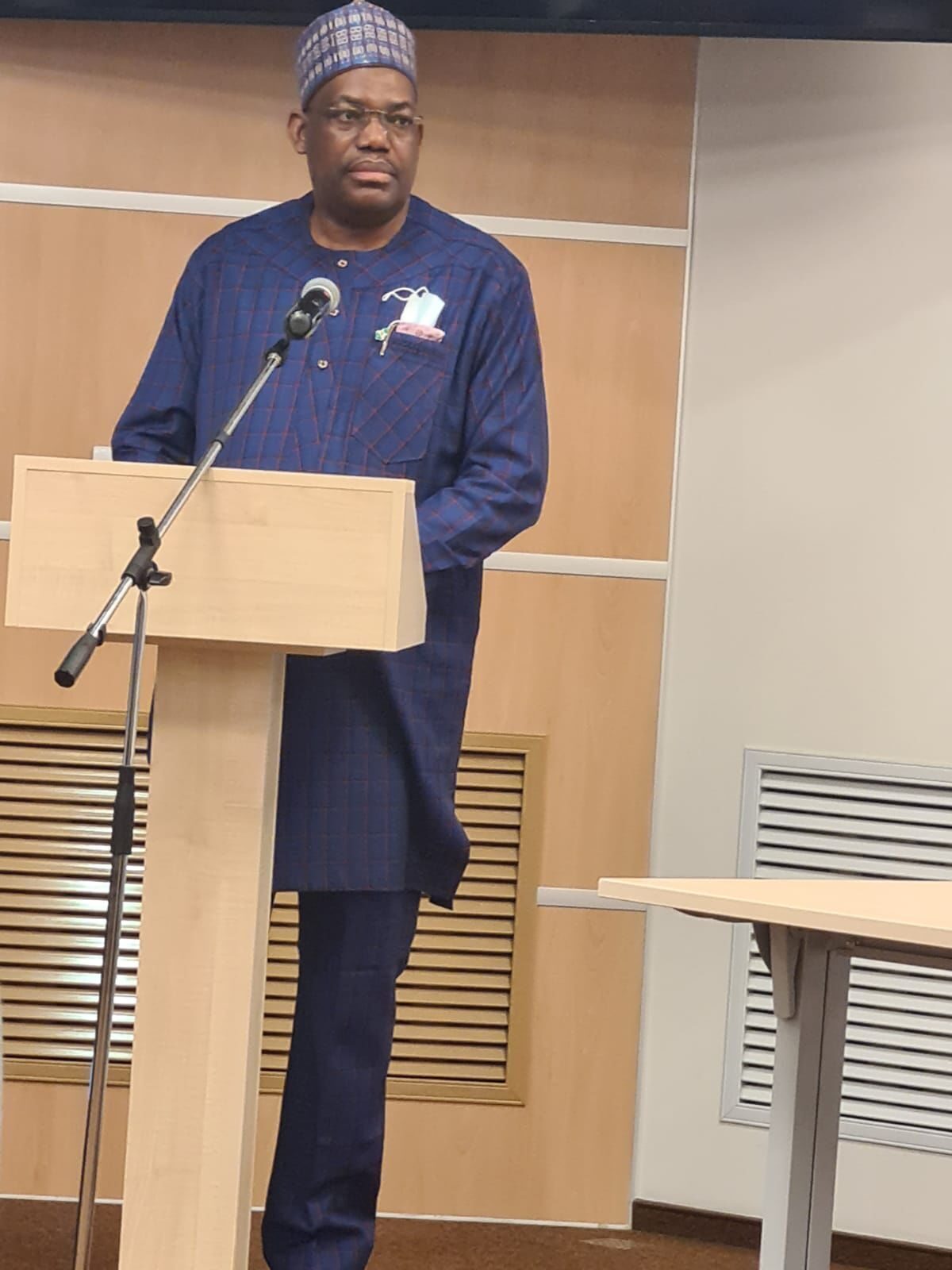 "In order to support the Moscow businesses penetrate African markets, the Chamber, on behalf of the Moscow Government, held an International teleconference "Moscow-Africa" in an online format," Vladimir Platonov said.  More than 1,500 participants discussed the prospects of exporting industrial products of the capital to the African market, including pharmaceuticals and medical devices, as well as agricultural products. Moscow's share in all-Russian non-energy exports to Africa was 22%. Most of Moscow's products were purchased by countries such as Algeria, Egypt, Nigeria, Sudan and Morocco." Another important area of interaction is the training of personnel, the use of the potential of graduates of Russian (Soviet / Russian universities). "In November 2018, an International Employers' Club was established on the initiative of the Friendship University (RUDN) and the Moscow CCI. This is the first project of its kind in Russia, designed to implement initiatives to train specialists who meet the requirements of the modern international labor market by combining business and educational institutions," the president of the Moscow CCI continued the introduction. At the end of the Economic Forum in Sochi in October 2019, RUDN and Moscow CCI held an International festival "I want to work in Africa". "We proceed from the fact that signing agreements with such reputable organizations as RAMS and AESSA will give a synergistic effect in promoting Russian and Moscow businesses to the markets of African countries," Vladimir Platonov summed up his speech.

Ambassador-at-Large, Head of the secretariat of the Russia‑Africa Partnership Forum Oleg Ozerov said that the second Russia-Africa Forum is scheduled for autumn 2022. "The concept of the forum is already ready and Moscow is given a serious place in it. Moscow CCI has a huge potential, which Vladimir Mikhailovich has already spoken about. And Russia's status will be even higher than we expected due to the fact that our country has applied to host EXPO-2030 in Moscow. We are promoting this application with a sense of pride, because Moscow is a super-modern city with excellent transport, logistics solutions, advanced technologies in the field of urban economy, artificial intelligence, etc." According to the expert, Moscow can offer all these technological solutions, these opportunities to African capitals that are experiencing a period of intensive urbanization. 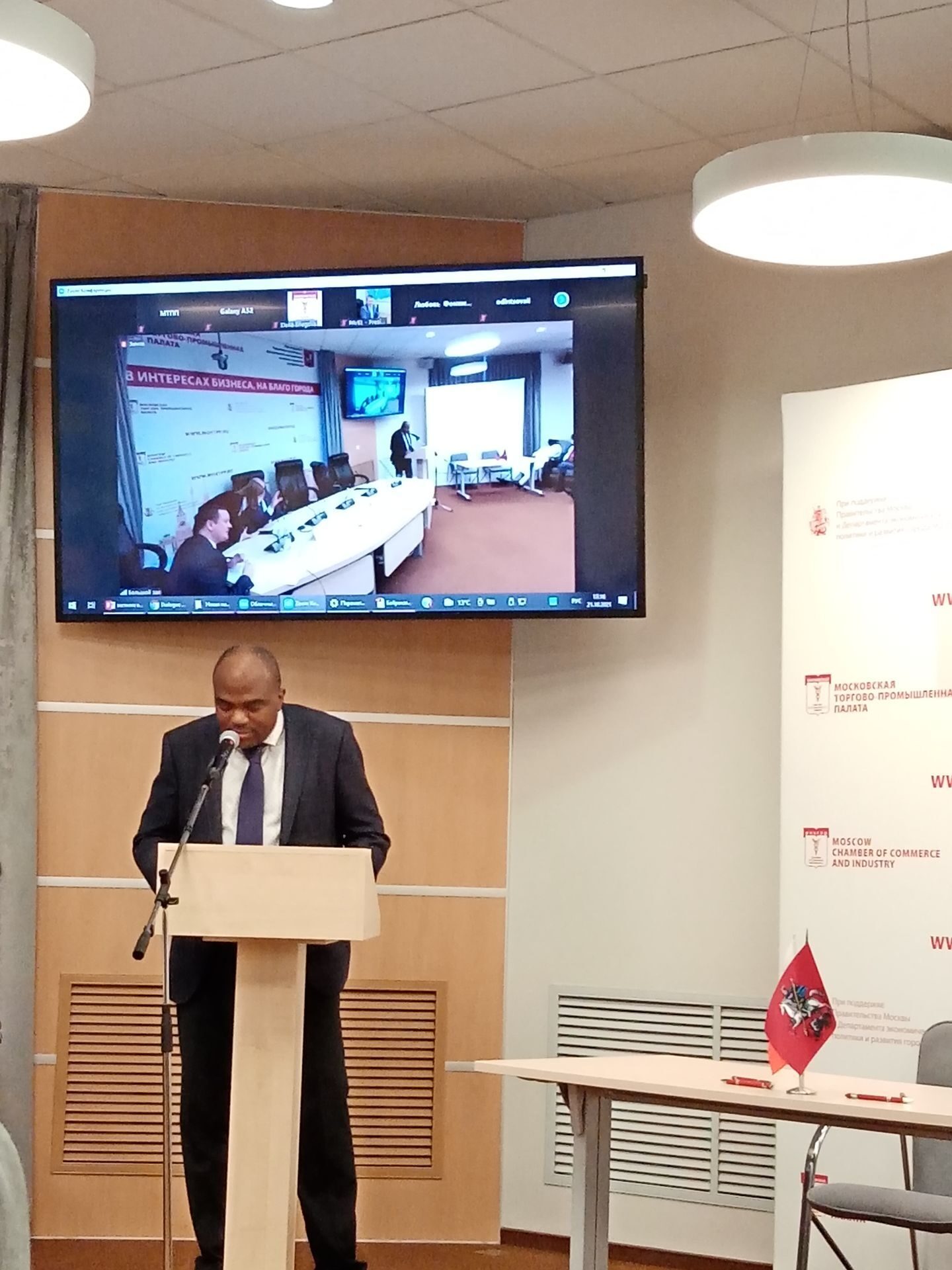 Chairman of the Presidium of the Russian Association for International Cooperation Sergey Kalashnikov indicated that the history of economic cooperation between Russia and African countries has several layers. "The first one is state-economic cooperation. This is a layer that is highly politicized and therefore constantly gives some strategic failures." The second layer is big business. According to the speaker, huge corporations of almost all developed countries are currently actively working in Africa. And the third level is small and medium-sized businesses. "At this level there are very big storms, changes, unevenness and generally a lot of problems. No country in the world can claim that it has achieved outstanding success at the level of SMEs, working in various African countries," the expert stressed. "Small and medium-sized businesses are built on relationships between people. The Russian Federation is the only country in the world that boasts large, powerful human ties with all countries of the African continent. We have the potential to create additional powerful economic ties between Africa and Russia, relying on human ties, on small and medium-sized businesses." One of the main areas of interaction, the expert called the creation of an electronic platform on which information about products could be exchanged with the possibility of direct contacts between sellers and buyers. In addition, the speaker said that the company "Etnomir" proposed to create a permanent platform on its territory where these contacts could be carried out. Another area of cooperation is the creation of a banking structure that would work with clients from Russia and Africa. According to Anna Belyaeva, Executive Director of AESSA, "we must come to the Second Russia-Africa Summit with concrete economic proposals. These should be new, modern solutions." At the same time, we are talking not only about specific problems and contracts, but also about system solutions. "I have to say that our small and medium-sized businesses, and large ones, really need support now: we need to tell our business about the opportunities that exist in Africa. There is not enough information," the speaker stressed. This problem can be solved through the creation of an Internet platform where you need to collect all the information on interaction with the countries of the African continent. The initiative to create a unified information platform was taken by AESSA on the eve of the Second Summit. 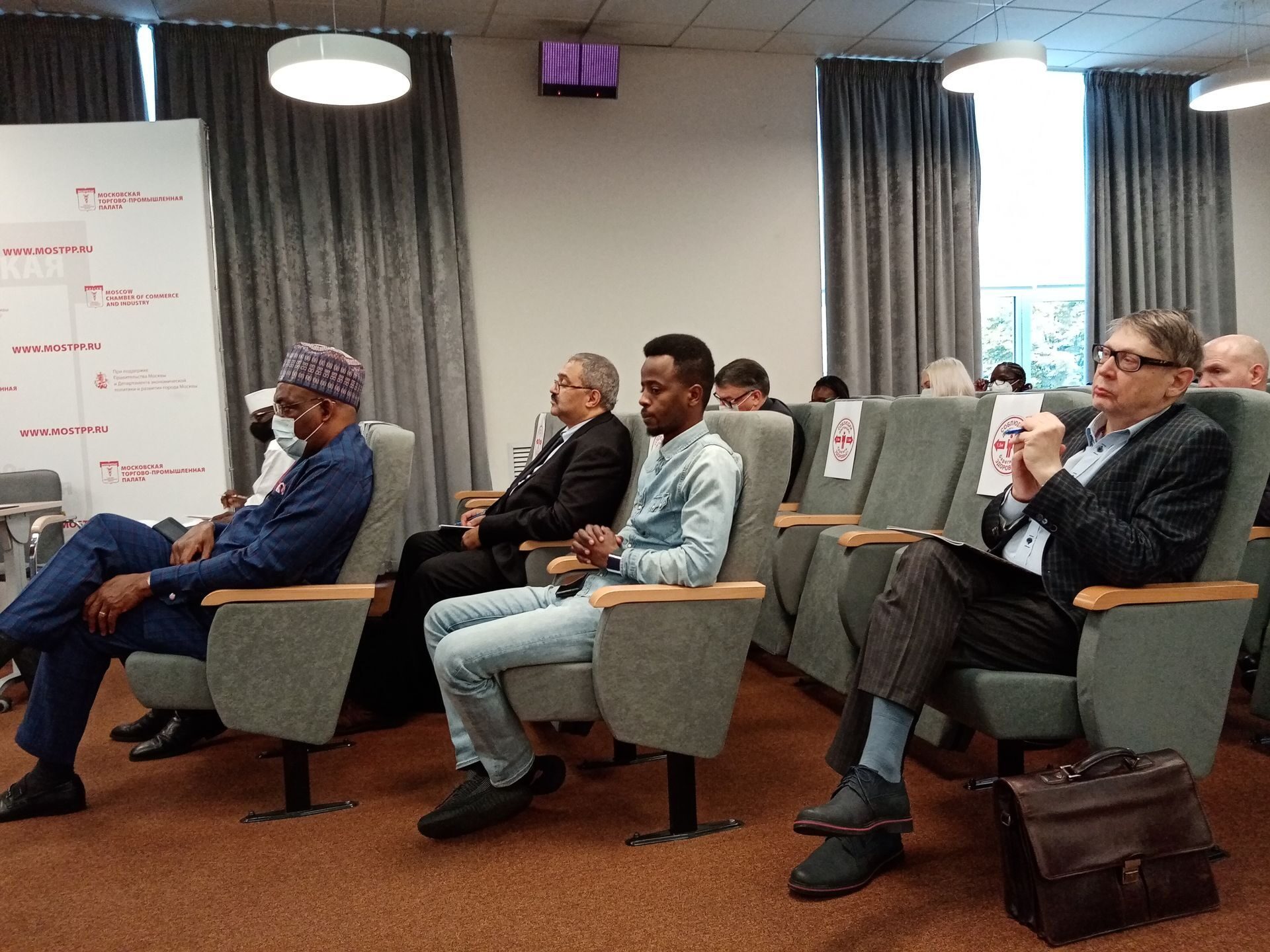 The composition of the participants of the round table was extremely representative. It was attended by diplomats of the highest rank from a number of African States: Ambassador Extraordinary and Plenipotentiary of the Federal Republic of Nigeria to the Russian Federation Prof. Abdullahi Yibaikwal Shehu, Charge d'affaires of the Embassy of the United Republic of Tanzania to the Russian Federation Dr. Mkama Svitbert Zaharia, Ambassador Extraordinary and Plenipotentiary of the Republic of Kenya to the Russian Federation Joshua Mugodo, Ambassador Extraordinary and Plenipotentiary of the Republic of Namibia to the Russian Federation Clemens Handuukeme Kashuupulva, Ambassador Extraordinary and Plenipotentiary of Sierra Leone Mohamed Yongavo. The chairman NIDOE Russia, Mr. Uwem Sampson participated in the conversation, he expressed the willingness of NIDOE Russia to support in eliminating the problems hindering trade and investment between Russia and African countries and he also spoke about a trade mission to Nigeria, scheduled for end of November 2021. All the participants expressed their willingness to cooperate with Russian entrepreneurs in various sectors of the economy. Moreover, it was particularly noted that, in addition to mining, there are other areas of promising cooperation in these countries: fishing, agriculture, tourism, high technology, etc. Meanwhile, the speakers said that there are also serious problems associated with different mentalities, differences in legislation, and difficulties with financial transactions. Following the results of the round table, it was decided not only to continue cooperation, including on the site of the Moscow Chamber of Commerce and Industry, in preparation for the second Russia-Africa Forum, but also to carry out interaction between Moscow entrepreneurs and colleagues from African countries through joint round tables, as well as the organization of business missions.