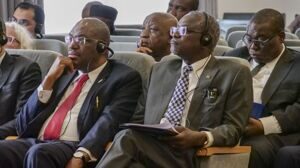 . The meeting was attended by ambassadors of African countries accredited in the Russian Federation, representatives of the national and regional government, public organizations and some companies in Moscow.
Vladimir Platonov, President of the Moscow Chamber of Commerce and Industry, delivered an opening speech. He noted that the meeting was especially important on the eve of the Russia-Africa Summit and Economic Forum scheduled for autumn 2022. “We are discussing those important elements that will become the constituent topics at the summit,” Vladimir Platonov emphasized. He spoke about the work already carried out to date to unite the efforts of Russia and Africa in organizing business events. The MCCI President called education one of the most important areas of cooperation, mentioning the International Club of Employers, which has already brought together representatives of many countries to train highly qualified specialists and establish mutually beneficial cooperation between entrepreneurs. “I am sure that all the proposals that will be made here and all the contacts that will be established will be of great benefit to our countries in this difficult time,” said the President of the MCCI. 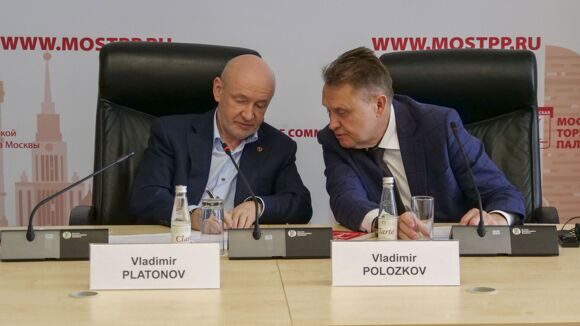 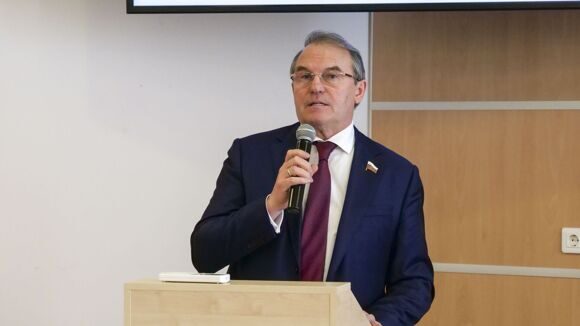 Chairman of RAMS Presidium, Mr. Sergei Kalashnikov noted that the problems currently existing in Russia "are not a product of our domestic Russian policy." “Russia is a huge market, this is modern technology, this is the knowledge that is needed today throughout the world; and we can correspond our capabilities. Under the sanctions that Russia found itself, it has become essential to have trade and economic ties outside of those state agreements and projects that most African countries have with Russia,” Sergei Kalashnikov stressed. Among the factors that hinder interaction with African countries, he noted the lack of a normal banking system, which, however, can be compensated by the creation of a single payment system between African countries and the Russian Federation. “I think that creating an export-import bank in Africa that would provide the full range of banking services for trade between Africa and Russia is not such a big problem,” the chairman of the presidium of the Russian Association for International Cooperation is sure. He also said that an electronic platform has already been prepared for "trading the entire complex of industrial and analytical things." There is a forward movement in the development of relations.
Senator Igor Morozov, Chairman of the Coordinating Committee for Economic Cooperation with African Countries, who is also a senator of the upper house of the Russian parliament noted that new relations between countries are now being formed; new international economic integration and payment systems are being created. How do we see Africa? This is a powerful continent with huge potential and opportunities for Russian businesses. We see great prospects for entering Africa,” said the member of the Federal Council. He believes that it is necessary to take the organizational process into our own hands. “The task of the Parliament is to create systems of state support together with the Government and provide these opportunities to our business in the near future. We clearly understand that today we need a system of trading houses in Africa. Because the trading house is a showcase of everything exported that is made in our country and we can exhibit it. 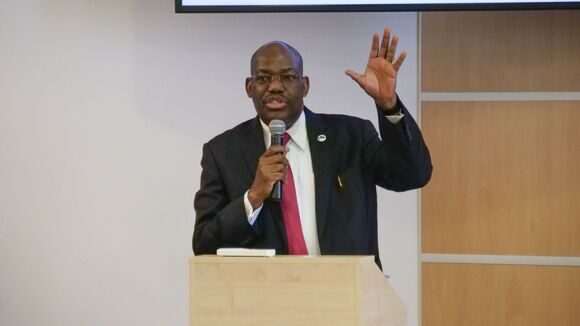 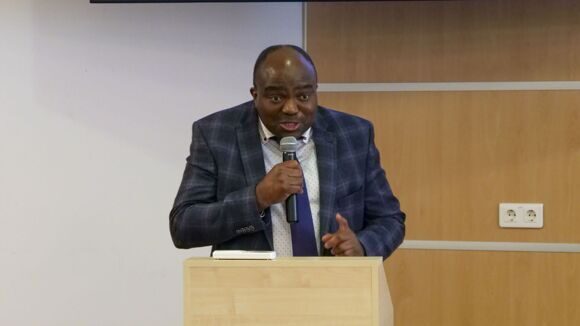 Minister of the Government of Moscow, head of the Department of Foreign Economic and International Relations of the city of Moscow Sergey Cheryomin noted that today Moscow is in search of new partners. “Of course, we are trying to maintain ties with our traditional partners, despite the difficult relations between the countries. I should note that to date Moscow has managed to maintain relations with more than 150 major cities in the world. This shows that cooperation with Moscow is in demand in the world; our partners appreciate the relationships that have developed over many years, and the experience of communicating with foreign companies over the past month in the acute phase of the international crisis has shown that most foreign companies are not going to leave the Moscow region, as they continue to consider it one of the most attractive for their businesses,” said Sergey Cheryomin. In order for these companies to avoid political pressure and sanctions from their own governments, Moscow is trying to provide them with all possible support. Pragmatism prevails in approaches to cooperation. At the same time, Moscow is actively building new relations with regions of the world, including the African continent. Sergei Cheryomin supported the idea of ​​creating a permanent presence in key African countries within the framework of trading houses and revitalizing the activities of Russian embassies and trade missions, because Moscow is actively looking for new supply chains and new markets today.
Having told the participants of the round table what Moscow has become in recent years, the head of the Department of Foreign Economic and International Relations said that the Russian capital had applied to host the World Universal Exhibition Expo-2030 and had already received the support of 49 states. 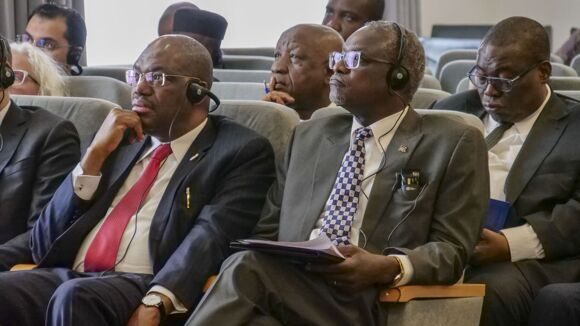 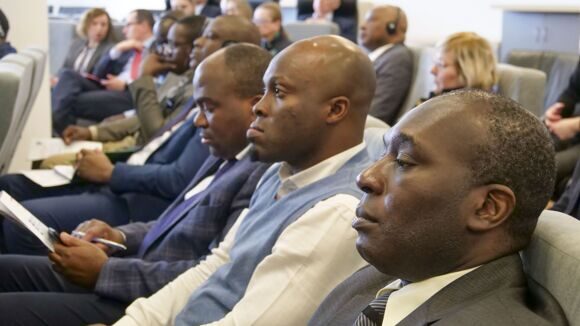 Then the Ambassador Extraordinary and Plenipotentiary of the Arab Republic of Egypt to the Russian Federation, Nazih Ali Bahaeldin Elnaggari, spoke and expressed concern about the food security of African countries.
Ambassador-at-Large, Head of the Secretariat of the Russia-Africa Partnership Forum Oleg Ozerov drew attention to the need to work together in order to achieve "high-quality, good results." He shared the concern that serious problems have arisen, which have been exacerbated by the crisis around Ukraine. “Indeed, the issue of food security is acute for all countries, including Russia. Issues related to food security in Africa are also very carefully studied in our Ministry in contact with other departments,” Oleg Ozerov assured. He called for joint work to solve these problems: to build supply chains, payment schemes, replace the SWIFT, and introduce the MIR payment system. “If we show a creative approach, act purposefully, we will be able to establish direct deliveries using various mechanisms and national currencies,” Oleg Ozerov said.
Chairman of the MCCI Commission on Foreign Economic Cooperation with Partners in Sub-Saharan Africa Konstantin Anastasiadi assured the participants of the event that in the field of economic relations, not everything is as dramatic as it seems at first glance. “We keep getting bananas from Holland, cocoa from Germany, and I doubt very much that they really grow there. The current conflict has revealed a whole layer of contradictions that existed, including in trade and economic relations,” Konstantin Anastasiadi said. He is confident that the current situation will allow us to get rid of those layers in trade and logistics that really interfere. Konstantin Anastasiadi suggested creating transport and logistics hubs in Africa, on the basis of which trade and economic platforms could be developed. And also to create transport corridors with friendly countries, which will solve many problems. 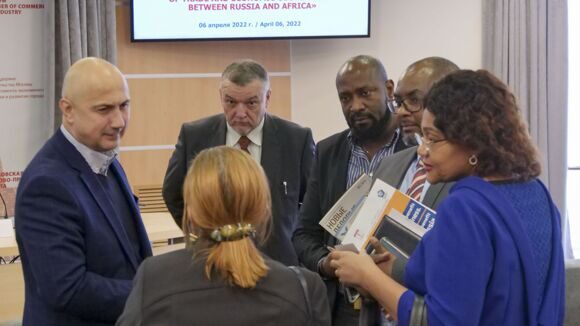 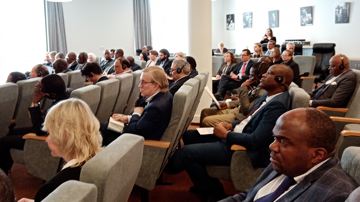 Experience and promising areas of cooperation were shared by representatives of Russian companies - General Director of NANODORSTROY LLC Alexander Bosov and Deputy General Director for Innovation and Technical Development of Bakor Scientific and Technical Center Mikhail Korolev.
In his closing remarks, Vladimir Platonov reminded the guests that: “We need each other. And the most reliable contacts are direct ones. We are ready for cooperation. Entrepreneurs are very interested in its development.” While Vladimir Polozkov, deputy chairman of the Moscow Public Relations Committee, who moderated the meeting, called on African embassies to initiate issues that are important for discussion. “We really need and are interested in your feedback. We will be very grateful for your initiatives,” Vladimir Polozkov summed up.